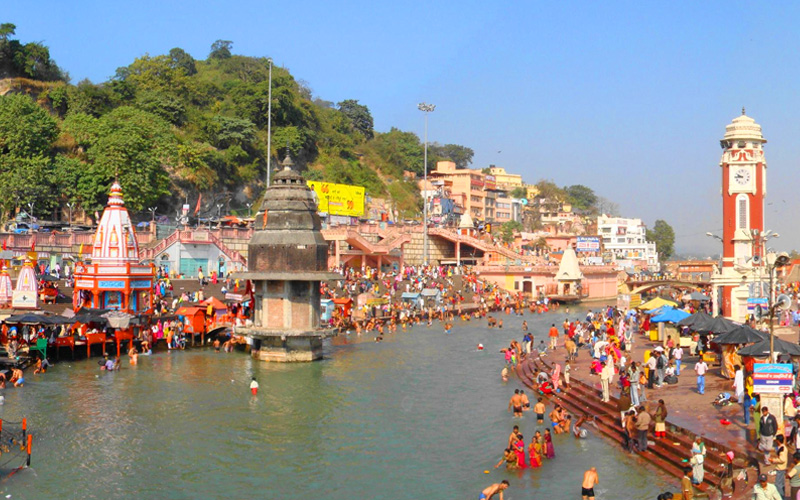 Tourists traveling from Delhi to Haridwar Rishikesh can take a maximum of one day bus tour. The bus tour comprises of the major attraction sites along Haridwar and Rishikesh. Persons visiting can be dropped and others picked while on transit. The tours are arranged privately so there is no disruption during traveling hours. Tourists travel at their comfort and pleasure. However, sharing of buses with other groups is not accepted. Regarding our plan of travel, our tourists visit all major attractions keeping in mind the time frame available for the tour. It is the small town in the north of India in the Uttrakhand State. The place is a scenic beauty with Ganga river flows down from the Himalayas. Western musical band, Beatles catapulted it to west when they came here in Maharishi Mahesh Yogi’s Ashram that is now closed. The inner city identified silently as the world capital of yoga. Many people called the place Gateway to the Himalayas. Hindu’s pilgrimage begins their journey of Char Dham Yatra i.e. the sacred journey of four shrines from Rishikesh.

As we all know Rishikesh is famous for its innumerable places & Laxman Jhula is one of these. The bridge is built up of iron and dimensioned as 70 feet above from the height of the river and 450 feet long. This hanging bridge connects two villages Jonk located in the Pauri Garhwal district & Tapovan located in the Tehri Garhwal district. It is also said that Lord Rama’s younger brother Lord Laxman, had crossed the river Ganga once in the ancient times with just two jute ropes. It is one of the central landmarks of the city and can be located easily. Whenever you take Delhi To Haridwar Rishikesh tour package, make sure to experience this bridge for sure.

Haridwar city offers several tourist attractions sites for both local and international tourists. Some of these sites include Chilla Wildlife sanctuary that was created back in 1983. Here, they can see wildlife animals such as the big five, hyena, jungle cat, pythons, antelopes, civets, deers, and tiger.Another attraction site is the Mansa Devi Temple located atop the popular Shivalik Hills. The holy temple was in honor of Mansa Devi, a goddess. The goddess’ name,” Mansa” is believed to mean wish. It is widely believed that Mansa Devi fulfills every wish of a dutiful and respectful devotee.The third attraction site in Haridwar is the Daksha Mahadev temple that is situated approximately 6 kilometers from Har-Ki-Paura. The magnificent temple is in honor of Lord Shiva. It was named after King Daksha Prajapati.
The fourth site is the Fun Valley water park located between Rishikesh and Dehradun. Here, tourists can get the most memorable water sliding experience of their lives. The park offers very attractive rates, especially for group tours. Some of the fun facilities on offer include Lazy river, Dome skied, water disco, Go-karting, wave pool, and kiddies pool.

Who would forget Kushavarta Ghat, which is over three centuries old? This is considered to be the holiest ghat in Haridwar. Important rituals and rites used and still are, to be performed at the shores of the river. Some of these rituals include Shraddha rites. Tourists visit this place to dip themselves in the sacred Ganges waters.

WHY CHOOSE US FOR HARIDWAR – RISHIKESH SAME DAY PACKAGE?

Note: No refund will be processed on Paytm/ Cash Deposit in Company’s Account.

The company will not be responsible for any stolen luggage, compensation or damages, if occur during your journey, but instead of that the company will help you in every possible way to make you recover from the situation.